This is our story and how it all started...

Ever since I was just a little girl, I have had a huge interest in All kind of animals. I rather watched animal programmes on TV than cartoons... And this was also why my parents finally gave in and bought me my first own dog when I was twelve years old.

I had been nagging since I was six years about getting a dog preferable a Basset Hound but any dog would do. My parents was quite sure that this interest wouldn’t last very loong so they wanted a dog that the whole family would like... and the choice fell on the Shih-Tzu!

We had met Shih-Tzus through my friend from school, Nilla, who's mother Tott (Charlotte Wistad) has Popeye’s Shih-Tzus. Through this our whole family learned to know and to love this wonderful breed. And this was the dog that my mother would like to care of if my interest would fade.

Now, about 20 something years later the interest has NOT faded, but on the contrary it grew!

The first but not last Shih-Tzu to rule hour household was the queen herself, Ida (Popeye’s Cute Cinebar Choise). But since I hardley gave anybody else any chance to cuddle with her, my mother wanted another one so that she also could get the feeling of having a dog. This was when the princess, Elin (Ch. Popeye’s Djinnie Djinnie) joined our family.

I travelled with Tott and Nilla to dog shows and that woke my interest. Ida wasn’t a big showstar but she is anyway one of the most beautiful Shih-Tzus I ever met that is her personality. We had many lovely years at the dog club nearby training obedience both as participants and instructors. Elin had a great heart and she was also a lovely show dog. She was my first show dog and my first Champion.

I have now been involved in the breed in many ways. And I am still today as facinated by this beautiful breed! 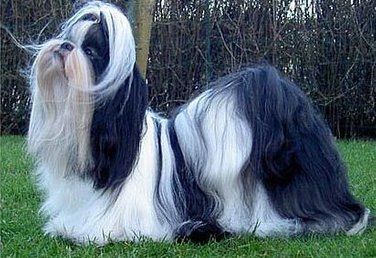 To learn moore I worked for a couple of years in the 90's for Barbro Sabel and the Lady Chimas kennel. During this period I bought my first male Chico (Lyckobringarens Wu-Ling-Wong). I fell in love the first time I saw him in his big round head with the softest expression and big black eyes. Unfortunately I did spoil this young man rotten... Which ended in that he didn’t do anything he didn’t want to do. But that is a true shih-tzu to me!

In January 97 mum and I visited Bodil Fossenius, kennel Fossella. She had a litter but I was not planning to get another dog. Then I met HER! She wasn’t for sale and I shouldn’t have any more dogs.... A year and a half later SHE moved in with me and this is the great Inez (Multi Ch. Fossella Dish of The Day). Inez has meant so much to me and how I look at our breed. With all her pros and cons she really stands up for the type of Shih-Tzu I want and strives for!

Any minute I can see a picture in my head of that little black and white Shih-Tzu puppy floating over the floor at kennel Fossella.... And that is a picture that I will look at anytime I feel the slightest insecurity about what I think the breed should stand for!

To have Bodil Fossenius as a mentor and breeder to my dogs has been a fantastic platform to stand on for me, and for that I am truly grateful!

I have had shih-tzus since 1988 and I wouldn’t change one single minute with this wonderful breed. The kennels I have been inspired by is Popeye’s, Lyckobringaren, Lady Chimas and Fossella.

You are never alone to acheve great wins like we have done! And my two shoulders to "lean on" is my dear husband Peter, who is a great part of the Young-Lo team both at home, with the puppies and a great companion during all the miles around our loong country. The other shoulder is Mum (Bodil Olsson) and Dad (Sven Olsson) both with their true heart and soul in this breed they are always sharing both my dogs and all our great wins! Sven has been the Chairman for the South Swedish Shih-Tzu Club for many, many year. Bodil is a member of the board in the Shih-Tzu Club of Sweden. 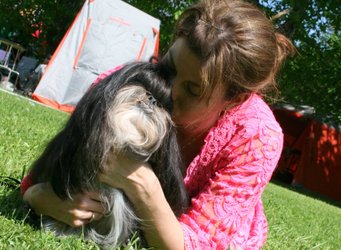 Some very good words frome the late Bodil Fossenius, a standard I will try to live up to when I show my dogs or let people use them for stud...

”We have the future of our breed in our hands and we must preserve it to the next generation who shall live with it and take over from us. We shall not develope it because then it will not be the same breed that our descendants will experience”.

In facebook we put some news and photos as well